Have you seen this bird in your area? The Indian Myna is recognised as one of the world’s worst feral animals, and its presence is on the increase locally.

Councils across the North Coast have provided specially made Indian Myna traps to residents to reduce numbers and to date thousands of birds have been trapped and euthanased.

Where they can be found

In urban areas large populations of Indian Mynas can be found around shopping centres, schools and factories. Locally they are more prevalent in rural areas, where they are often seen near bales, dairy sheds and yards where food is readily available. Indian mynas are a threat to wildlife as they are extremely aggressive and will completely exclude other birds from an area.

Indian Mynas roost in the trees near the shopping centres and spread out to the surrounding areas to feed during the day. They mark out their territory and defend it fiercely, combining and using their superior numbers to keep the Australian native birds away. That is, if any natives in the area have survived the breeding season.

During the breeding season the flock combs its territory for breeding hollows. If any are already occupied by possums, sugar gliders, rainbow lorikeets, corellas or any other animal species they attack them and eject them from the hollows. If there are eggs or young in the nests they throw them to the ground, the eggs are destroyed, the young killed. Should the parents attempt to defend their home and young, the Indian Mynas keep attacking in large numbers until the defenders are dead or have fled. Any Australian native bird or marsupial that requires tree hollows to live or breed is subject to Indian Myna attack during the nesting season. Any bird or animal that enters the Indian Mynas territory at other times will also be attacked. Indian Mynas do not share territory or food sources willingly. Uncounted millions of Australian native chicks and marsupial babies die from Indian Myna attacks every year. With the adult birds homeless they are unable to breed. Because the marsupials are territorial, even if they flee the attack they are unlikely to survive away from their home territory.

Do the Indian Mynas make use of all the hollows they acquire? No they don’t. The ones they don’t need they fill with garbage and rubbish to prevent the Australian native birds and marsupials returning. This is backed up by military style action to drive any new natives away.

They are an environmental disaster which if it continues to be ignored will mean that within a few generations (or less) the Indian Myna song may be the only one heard throughout much of Australia.

How you can help

If you would like to be a part of the community Indian Myna trapping program, contact Council to arrange collection of a trap on (02) 6660 0300.

Do not confuse Indian Mynas with the native Noisy Miner shown here. This native bird is not a pest. 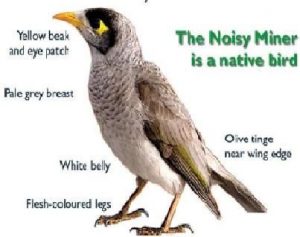